Aside from shooting and hunting I spend a lot of time running, swimming and riding a bike. I really should spend more time lifting weights – I get to the gym about once a week. If the weights were outside I might lift them more often. During gym workouts I stare outside and think I’d rather be there. This morning, the rain eased so I headed out on my mountain bike.

The plan was to take an “adventure” ride. Those are rides where I set out to investigate trails I’ve not ridden. The area where I rode wasn’t a site where I could get lost. I could get off course and I did a few times, but I never got lost. 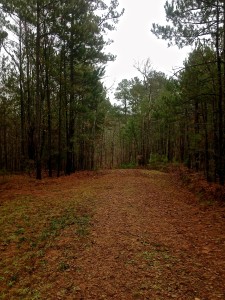 What I wanted to do was find a trail that would get me through the woods to the water at the end of the little peninsula where we live when we’re in Georgia. The ride crisscrossed dirt roads, hard pack, deer trails, and bona fide paved roads.

The journey lasted just under two hours. I found many dead ends that required me to back track. The deer trails were thorny at times and muddy all the time. Eventually, I made it to land’s end and was rewarded with a spectacular view. 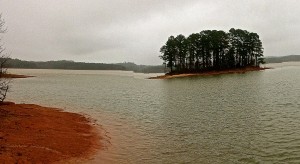 Heading back I met Brenda driving down a dirt and gravel road.   She had mistakenly thought I’d taken River, my dog, with me. Inviting River run me with while I ride is okay for shorter trips. But, for a long unplanned trip, she stays home. River was missing which caused Brenda to become concerned. Actually, River had hidden on a very comfortable cot and was snoozing.

I woke her up when I got home. Then, we both took off for another ride, this time a shorter one where she could go and investigate. The accumulated trips took close to three hours. It felt great.