I didn’t see anything my first day of hunting in Wilkes County, if I exclude the two doves. I headed out of the woods about 5:45 PM. I packed my gear on a Ranger ATV and while driving back to my truck nearly ran over a deer. It just walked across the trail. It isn’t like a gas powered ATV is quiet. The deer, a large doe, never even hurried to get out of the way. She acted like she had the right of way. Aside from that – nothing 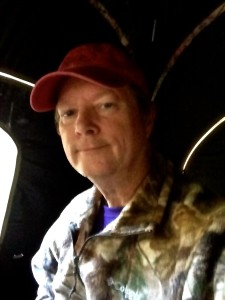 My father-in-law, Ray, hunting several kilometers away on his 800-acre property had at least seen several doe. (Note: plural does or doe –Both does and doe are correct for plural.) He’d spied a large buck and hoped it move out of the thicker woods so that he might get a shot. The buck stayed away and Ray didn’t bother with the other deer. As a result, we ended day one empty handed.

On the second day, Ray saw the two doves, or at least a similar pair. When 6 doe came my way I was less picky than Ray had been on the previous day and took one. I didn’t shoot the largest. I was “way-back” in the woods with plenty of wet red clay to deal with on the way out. I made sure that whatever I decided to shoot, I’d be able to get it on the ATV. Still, getting the doe on the ATV was a bloody mess.

Last year, Ray and I hauled several big deer out of the woods. More than once one of us bit the dust trying to get a deer out of ravines and thickets. So, I like having a plan of how I’m going to get what I harvest to the fellow that processes the meat.

Today’s plan went well; basically shot what I could haul. I got the doe on the Ranger then into the bed of the truck. Dropping the deer off for processing I had help unloading it. Before we left, Ray picked up the deer he shot last week to add to the pig he’d shot that we’d picked up yesterday. (both shot with a bow)

Ray’s got three refrigerators here and their freezer sections are all full. I’m hoping to get another pig and one more deer. Ray’s considering buying a freezer, I’m thinking I may need another ice chest to get this year’s meat back to North Carolina. We’ve still got another two weeks of hunting to go here before heading back to Hertford.