Today I was able to concentrate on archery. The morning was devoted to target practice, in the afternoon it was hunting.

In order to practice outside I needed to set up a range. Using a tape measure I marked distances from 20 to 50 yards in 5-yard increments. The Block that I tacked a paper target was positioned onto a plastic chair. The chair was then wedged in the ground before a dirt mound backstop – just in case.

River, my dog, enjoys watching me shoot. On this day her attitude was exclusively play therefore she had to sit in the truck. She whined the entire time. After an hour of shooting and listening to River complain we headed home for lunch.

Following a feast of Christmas leftovers Ray, my father-in-law, and I headed to the woods. We loaded the Polaris Ranger and hauled it away for the hunt. We’d stay out until dusk, the time our trail cams suggested we’d have luck. We’d each pre-selected an area to hunt. It had been raining and the ground, much of it is red clay, was filled with tracks. We could see recent passing of deer, pigs, coyote, raccoons and turkey. We were optimistic. 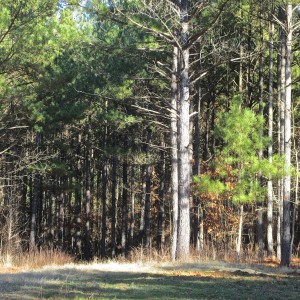 Dropping Ray off at his site I drove the Ranger to the area I’d chosen. It was clear a lot of deer had recently been here.

It was too dark to shoot at 5:30PM. I’d neither seen or heard anything. The woods were quiet. The woods were also spectacular, cool, calming, and peaceful. Even though neither Ray nor I had seen anything we both enjoyed the afternoon.

Being able to shoot and hunt is a great pleasure. Practice makes for better hunting when a shot is presented. Even when there isn’t a shot – an afternoon in the woods beats an afternoon at the office.