Brenda wanted to meet our daughter, Heather, in Lexington, GA. Lexington, incorporated in 1806, has a population of 228. There are a number of antique shops along Main Street and the town has two restaurants. We driven through Lexington dozens of times and never stopped. On Saturday morning, we drove over from Tignall to visit the little town. We’d go hunting in the afternoon.

Lexington, a total area of 0.5 square miles, did not take long to explore. We’d finished our tour by 11:00 am, about 30 minutes after we arrived. The excursion might have lasted longer but several of the little shops were closed.

Eleven in the morning was time to start thinking about the two restaurants in town. We’d eaten breakfast around 6:00 and we were starting to get hungry. We chose Paul’s Barbeque and walked over for lunch.

Our party, Brenda, Heather, Ray and I, were the first of the day’s customers. Paul’s serves a North Carolina vinegar base sauce, odd for Georgia. We ordered and enjoyed our meals as the dining room was beginning to fill.

Our party, Brenda, Heather, Ray and I, were the first of the day’s customers. Paul’s serves a North Carolina vinegar base sauce, odd for Georgia. We ordered and enjoyed our meals as the dining room was beginning to fill.

I mentioned to an employee, a middle aged man, that I’d noticed Paul’s while driving through Lexington for many years. I wondered how long Paul’s had been in operation.

The fellow said the Paul’s had been around for a while, but it was never going to make it and was doomed to fail from the day the doors opened. 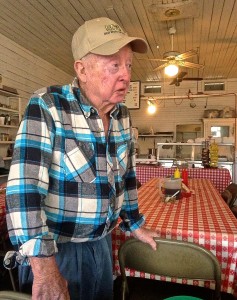 “So, how long has it been in business, “ I asked

“Eighty-five years, but it’s not going to make it, “ he replied. I suppose in some books a barbeque hut hasn’t made it until the century marked is reached.

After lunch we returned to Tignall gathered our gear and headed to the woods. The temperature was in the low 60’s with clear sky for a change. The gear included a Polaris Ranger – high style.

Reaching Ray at around 5:30 PM, I learned he had shot a 6-point buck. Great, but I didn’t see it anywhere. Ray had a solid shot on the deer, he said. But, it ran about 150 to 200 yards before dropping. “It took me a hour of hiking around to find it,” he said. He pointed out, “There was initially a lot of blood then it just stopped.”

The under brush was thick, but Ray had found the deer. He tied orange tape to trees to lead us to the deer. The tape worked, guiding us right to the deer – down a steep slope and laying in an even steeper gulley. The gulley washed in rainwater from the past several days. Perfect.

Ray had gotten this deer – I’d been in an areas were hogs have been rooting. None come out before I had to leave. We’ll head back out to hunt again on Tuesday. In the meantime, this buck is being processed and we’ll enjoy it in the near future.

4 thoughts on “Deer Number 5 for Ray”