Our next-door neighbor sold his house.  It took only a short time and sold for over the asking price.  It seems like good news that the house sold so fast and the value had increased substantially.  Of course that sent us to Zillow to see what it reported about our house’s potential value.  Indeed, it had risen.

However, we’re not in the market to sale and buy another house.  This means we’ll be getting new neighbors.

A few days ago I noticed one of the new owners outside in her new backyard. They’d not moved in while the interior was being repainted to suit their tastes.  I walked over to introduce myself.

On that meeting I learned the couple, about the age of Brenda and I, were adding a pool, clearing some of the woods for open a parking space for their 38 foot long RV, and putting up a privacy fence.

As my new neighbor explained, the fence was to keep their two dogs at bay not because they were unsocial.  I’d considered the privacy fence and pool then suggested inherent opportunities for nude bathing while avoiding prying eyes.

In fact, she was very pleasant despite avoiding my humour, again lost or ignored by the intended target. She mentioned her husband was overseas and due home soon. Appareltly, making slight off color joke can send up needless alarms. We exchanged phone numbers and I offered my help if they needed it. That exchange left me believing our post-joke conversation had satisfied her that I am safe.

A few days later, at night, I received a phone call from her.  It went like this, “Mr. David, do you own a gun?” I replied, “Yes mam, this is Georgia, everyone owns a gun.”

Indeed, at least one town in Georgia has a law that the head of the household owns a gun and has ammunition for that gun. (1)

The call continued, “Well, we’ve got a rattlesnake out front.  Can you come over and kill it?” she asked.  “I’ll be right there.”

It took a minute or so to get the key to my gun safe, retrieve a .410 shotgun and some snake shot.  Once collected my armament I headed over to shoot the snake.

I’d seen video of people shooting snakes with snake shot.  Large snakes seemed annoyed by the shot.  I’d always felt those were rare cases.  Snake shot did good work on the moccasins and copperheads around us when we lived in North Carolina. I was about to learn a lesson.

When I met the snake it wasn’t a small one.  This snake turned out to be just over four feet long and weighted several pounds.  My .410 is a double barrel and I shot it twice with the snake shot.  That really pissed it off.

I walked back home and grabbed a couple of shells with four shot.  I figure that would do the trick.  That is if I shot it in the head a couple of times.

Two shots later, now four shots had been delivered, the snake’s head was pulp.  A group other neighbors had gathered to witness the execution.  Prior to the final shots there had been calls to wait while pictures were taken and requests not to shoot it in the body so the skin could be salvaged. 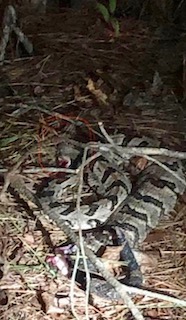 When the task was complete the crowd that had gathered stared at the massive snake. A great deal of advice regarding snake prevention was bantered about. A father lifted the dead timber back  with a stick allowing his boys to touch the undamaged skin. It turned out no one wanted to take the body home to remove that skin.  A hole was found to be used for the monsters headless body’s final resting place.

The crowd slowly dispersed everyone mumbling about the rattler.  What I took away from the event is that next time I’ll gather up a 12 gauge.