Brenda and I drove to Savannah to spend time with out oldest daughter, her husband, and our grandson, Heather, Bill and Sean, respectively. Sean is 4 years old, and loves pirates. Tybee (Savannah Beach to some) was the host of a Pirate Festival. Heather and Bill booked a rental house on Tybee Island, where I’d spend my childhood, for the duration of the Festival. They invited Brenda and me. This was going to be an adventure. We’d enjoy a pirate festival with Sean; I’d race, shoot indoors, and go hunting over ten days.

I’ve never attended a Pirate Festival. Sean planned to dress the part of a pirate, so all the adults would be required to become appropriately attired pirates. I stressed the importance of dressing true to current pirate practice observing the Somali pirates as my example. I pointed out that modern pirates wear running shoes, shorts and t-shirts. I failed to gain a consensus for that apparel. The opponent in this pirate dress debate proved to be unbeatable despite his youth.

Prior to the main pirate event we spent time on the beach. Sean and I are runners. In fact, Brenda found me a race in Savannah for Saturday. As part of my pre-race preparation Sean had me doing wind sprints on the beach.

Sean would have me run a nice tempo pace, one that kept him at my side and able to coach. His coaching demanded I sprint to observed points along the beach.

“There granddaddy, speed for that!” he’d shout while pointing to the object. If my increased pace was unsatisfactory Sean offered further instruction, “Speed faster granddaddy!” It would not have been bad except the ‘ad lib’ beach training occurred immediately following dinner.

Saturday’s race was well planned and organized. Initially, I’d intended to simply enjoy the run. But, as often is the case with a 5K, as soon as the gun sounds, I run hard. I had forgotten about the heat in Savannah and paid the price toward the finish. I fell back three places ending up 12th overall and taking 3rd in my age group. Actually, the guy that won the race was in my age group. 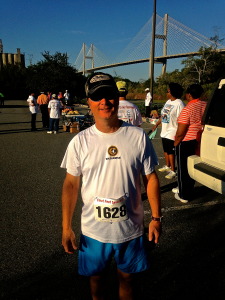 Putting it on the line is in part about being alive and finding challenges that are outside of your comfort zone. Wearing a pirate costume is weird, but grandchildren make adults do weird things. Pushing hard in a 5K isn’t comfortable, but the effort is transient and the reward, regardless of place of the finish, is lasting. 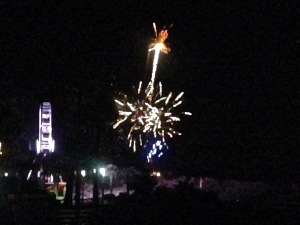