Streaking, the first time I heard of it was associated with a form of running fad that occurred in the 1970s.  In this instance, it was a fad where runners would strip then run naked. Freely, I admit this was a form of running where I did not participate.

Several of my less modest friends did partake in the fad on one occasion. The group stripped, held their clothes in their arms and ran across Abercorn Street in Savannah, Georgia near the intersection with DeRenne Ave. It was  1972 and traffic in Savannah wasn’t comparable to the mess they have there today.

There is a median on Abercorn with two lines of traffic running in opposing directions.  The free form runners weren’t all that immodest and had selected a time for their streak near 11 PM when traffic, in those days, would be light. It seemed a fairly inoffensive plan.

The plan was to wait until there was no traffic, make the dash across Abercorn, and hop into a get-away car and escape. That would have been fine except for the mishap.

One of the runners, in his birthday suit, dropped his clothes as he crossed the median.  He had to stop turn back and retrieve them all while butt naked.  This is the point where traffic returned to the intersection.  There he was stranded until the traffic paused and he could return to running.

Streaking today, in running, means running daily for long stretches without a missed day.  Runner’s World’s covered highlights on page 30 in an article, Run Every Day – Streaking is more important than ever. (Issue 3, 2020)

Runner’s World also has a section in this issue on injuries.  Is that coincidence or consideration?

If you run every day without a recovery plan you’ll end up with an injury.  Obviously, you are probably an archer and you’re thinking you’ll not get a run injury.  You are probably correct – we know most of you are not runners. Simple observation during any archery tournament is all the verification one needs to confirm the bulk of archers are at best intermittent     walkers.  The walking primarily an activity associated with pulling arrows. 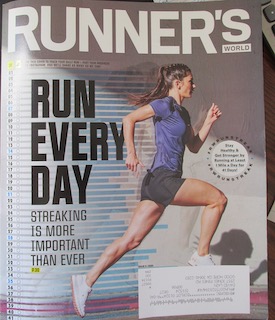 Surely, some of you do run.  Some of you probably get Runner’s World magazine.  Take my advice – schedule recovery days from your running.  If you’re an archer you should do the same with your archery training.

It is fun to set goals.  A goal of non-stop daily running (or shooting) could land you in rehab.  Rather than setting a run a day goal set other goals.  Once, I set a goal to do at least one race per month until something happened outside of my control to prevent a monthly race.  I went 84 months (7 years) before an accident happened that prevented me from racing.

I’d jumped off my boat to align the boat with the boatlift.  I’d done it many times before.  That time, however, I found a metal spike in the water – something new.  I found it in my leg.   That streak was done. It was a good long streak and I enjoyed it.  Aside from the metal spike in my leg I remained injury free throughout the plan. I did have weekly recovery days in my training plan.

Goals are nice to set.  But, there’s no reason to set goals that might lead to an overuse injury. Make time in your training plan for recovery.