The two recent cycling time trials left my legs a little weak. A day off while I drove to Georgia, the day following the last race, was my official rest day. Since we landed in Tignall I’ve run and ridden every day. The last two days were bricks, off road – that is trail running and mountain biking. (An example of a brick is where you run and after completing the run training you begin your cycling training. It could also be a swim followed by cycling.) This evening while making dinner my legs felt a little wobbly.

It’s not a bad feeling; it’s that leg shaky ache earned when you’ve been putting in a lot miles. Riding off road in this hilly section of Georgia has been a blast. Not crashing, I’ve not been on my mountain bike since my last trip to Georgia, is a bonus. Because the riding has been off road I’ve been standing on my pedals a lot, keeping my rear off the bike’s saddle. There are times when riding in that manner is critical and it can add some extra burn to your thighs. 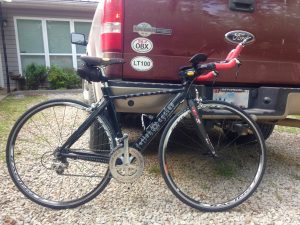 I keep one tri-bike, my Fetish (The bikes brand name not a carnal preference) along with a Cannondale F-5 and Scott mountain bike. The Cannondale is the bike coming back to North Carolina for the XTerra race. Hopefully, by the time that race starts my mountain bikes skills will have returned. Until then, I expect more shaky legs from much standing off the saddle while cruising trails. 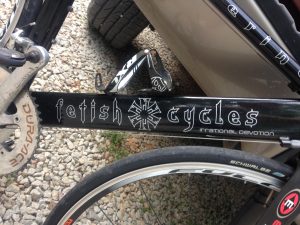 (Now it’s off to Appling, GA to shoot)