We took a week for vacation. Granted, Brenda and I are officially retired. Still, she teaches yoga and I work hard trying to become a seriously competitive archer and archery coach. While there’s little money in those endeavors, they each represent a form of work. As such, we needed a vacation from our normal routine. Hence, a vacation.

Vacation was a trip down to Panama City, Florida. We loaded the Winnebago and headed south. Along the way we stopped in Cordele, Georgia and camped at the Veterans Memorial Park. On reaching Florida we met up with our life long friend Ken who was camping as well.

Before we hit the road, I’d been looking at a disturbance in the Caribbean. At that point it was only rain and a little wind. But, the pattern suggested that sooner or later it could become a hurricane. I was thinking, maybe we’d make it through vacation before this area had a chance to turn into a storm.

For a few days vacation was wonderful. We visited parks, springs, ate great food and hung out on the beach. On Monday, October 8th, I said to Brenda and Ken, “You know, I think we should get out of here. That storm is going to come this way.”

I could tell Brenda didn’t want to head home. Ken wasn’t too eager to leave early, either. Actually, Ken had plans to depart and head northeast in his motorhome toward Savannah, Georgia in a few days from Monday.

It took only a small amount of effort and showing them the track of Hurricane Michael before we decided to part ways with Panama City. As Ken looked more closely at the potential path of the storm he remapped his planned trip and headed northwest – away from the projected path.

By Monday afternoon Brenda and I were in Cordele, Georgia, again. Hurricane Michael was now a Category 3 storm and aimed directly at the campground we’d left earlier in the day, or so it seemed. By Tuesday, Michael was a Category 4 and passing through Florida aimed at Cordele. On Tuesday we were back in Good Hope, Georgia, just outside of Athens. On Wednesday night Michael was knocking down limbs, flipping over trees and pouring rain on us. Michael’s punch was merely glancing  for us but enough to feel we’d be chased.

When hurricanes come our way here at the Albemarle Sound and Little River, we head west in our RV. Okay, west might not work this time considering Irma’s projects potential paths.

East or South are definitely not opinions. There a small gap in the computer plots just North of us. Virginia is looking pretty good right now. Which is exactly what we did when Mathew visited.

Of course, the forecasts were all off and during Mathew I figured we die in the Winnebago under a pile or trees. Or we could stay put, which is what we did when Hermine came through.

We’d just about gotten back to normal following Hurricane Hermine and Julia when Hurricane Matthew drove up the east coast. Living near the Outer Banks of North Carolina is not the best place to be during hurricane season. Actually, since we purchased this property six years ago we’d had tropical cyclones visit us on an annual basis.

Hurricane Matthew looked like a serious storm, to me anyway, from its onset off the coast of Africa. I’d been watching it from the very beginning. Eventually it formed into a Category 4 storm and was a big one. If you’d placed the cyclone in the center of the Caribbean it would cover that entire sea. 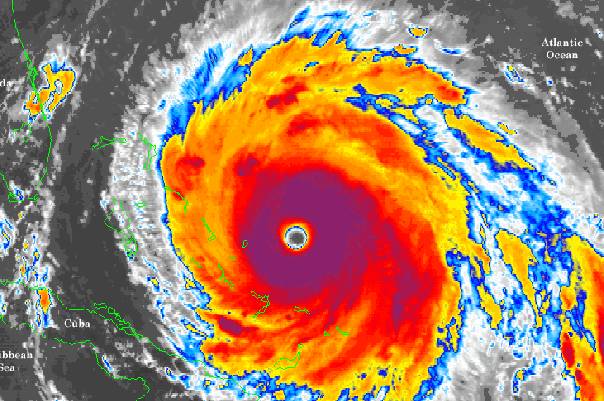 The weather forecasters were suggesting this massive hurricane was going to poise little problems for those of us near the Outer Banks of North Carolina with the exception of a brush past Cape Hatteras. Many of my friends felt otherwise. Brenda and I decided we’d secure our property, load up the Winnebago and head northwest.

If you’ve followed the news you know the forecasters got this storm wrong. Even though we’d selected a campground 102 miles away from the coast we still got the storm. In fact, we’d discussed driving further west before it hit. However, the forecasters seemed confident our maximum impact might be 1 to 2 inches of rain. Man, by the time Matthew had passed I was thankful we didn’t have a tree on top of our Micro Minnie.

The flooding and damage to North Carolina isn’t 100% the blame of Matthew. Within weeks of Matthew Hermine and Julia had hit us. A lot of folks had forgotten about the water those two storms dropped on the State. When Matthew hit, and Matthew did pack a punch, the already saturated low country couldn’t handle any more water. The result was one of the worst sets of conditions for a hurricane imaginable.

After the storm we added a few more days to our campsite stay. The reports of flooded roads were enough to keep us off them. When we did drive back to our home near Hertford, NC was passed areas that were severely wrecked.

There were houses with water up to their first floor windows. Cars in water leaving only the roof of the vehicle exposed. Two of the roads leading to our house remained underwater and cars could only pass driving single file, slowly, in the middle of the road.

A week later we drove into Elizabeth City. Their flooded streets and homes remained blocked and barricaded. Friends in Hampton Roads and Virginia Beach told us that in their area ditches are now creeks and creeks are rivers.

Hurricane season 2016 is nearly past. Currently, Hurricane Nicole is moving away, never a danger to the US, and a yet unnamed (but numbered) storm in the Caribbean may develop as it moves toward the Bahamas. Like many others, I hope this is it for 2016 and that we get a break in the future.

When we purchased our vacation home here on the coast of North Carolina I called my Uncle Dan. I was excited about the property. It is on the Little River where it joins the Albemarle Sound. From there I can look out and see the Outer Banks. The first words from Uncle Dan weren’t congratulatory. He paused then asked, “What were you thinking?”

We’d both grown up on Tybee Island, Georgia. At least I was there until I was eight when we moved to Isle of Hope, Georgia. Dan remained on Tybee. When he inquired as to my considerations for the purchase he was thinking, and I hadn’t been, Hurricanes. As soon as the asked, I remembered and upon recognition all I could think was, “Oh, shit.”

Since I’d left Savannah I’d pretty much put hurricanes out of my mind. Now, I had a vacation home in a place more likely to get those Atlantic Cyclones than where I’d been raised. And today, having sold our home in Easton, Maryland, we live on the Little River full time. 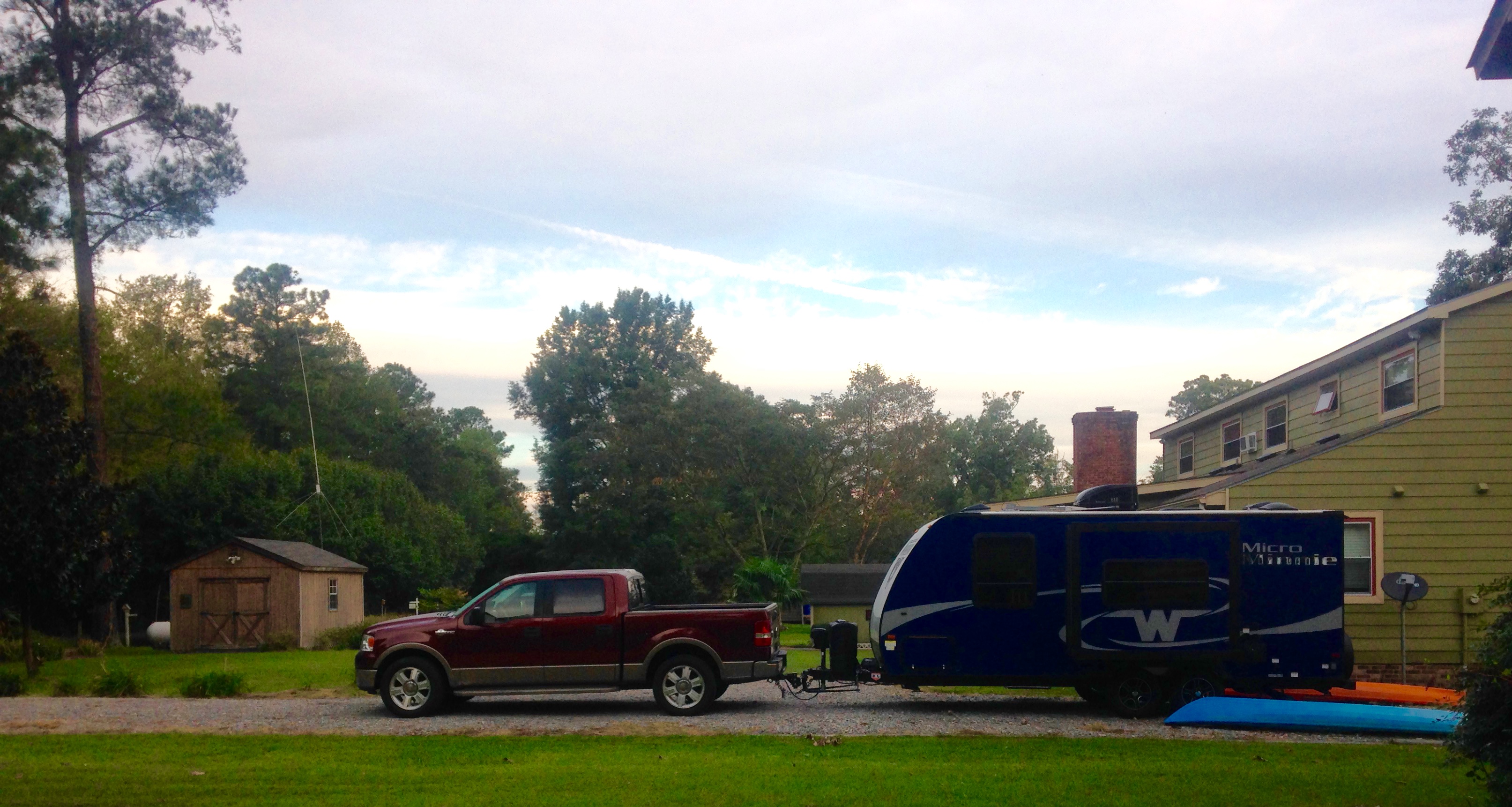 As Hurricane Matthew approaches we’re loading the Winnebago and heading west. We’ll make a stop in Williamsburg, Virginia until Friday. On Friday we’ll drive west some more staying well away from the mess coming up the East Coast.

When we return, should things go badly, perhaps we’ll be getting that new roof I’d been planning.

A few days ago Tropical Depression Bonnie nearly crossed our path here in New Hope (near Hertford), North Carolina. The weather maps showed that the outer boundary of the depression hovering over the Outer Banks and just above the Albemarle Sound. 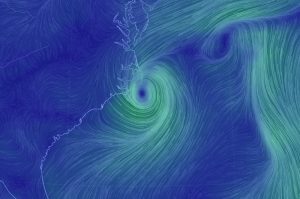 I was curious – how accurate are those images being posted online by Wunderground and the National Hurricane Center? So, I walked out to the end of my dock and took a look for myself.

Admittedly the data online was very accurate. We were just outside of the really foul weather by a few miles. That meant I could still get in some archery practice.

Bonnie hung out off the coast here for a day or so then gathered stream and headed east into the Atlantic. I won’t miss her. Living here in the coast of North Carolina we’re going to get more than our fair share of hurricanes. Only Louisiana, Florida, and Texas get more hurricanes than we do in North Carolina. Georgia, my home state is number six among the top ten states for attracting ocean originating cyclones.

Even though Bonnie skirted past us, she provided parts of the state with a bit more wind and rain than we received. I mentioned to a friend, when the storms come we’ll get the Winnebago and leave. He asked, “Where will you go?” My answer, “To where the hurricane isn’t going.”

(To my good friend in New Orleans – Terry we’re one up on you.)