When Hurricane Sally’s remnants passed over us there was a lot of rain.  There was a pause in the rain around the usual time I go running every morning.  Taking a chance, River and I, headed out to the trails. 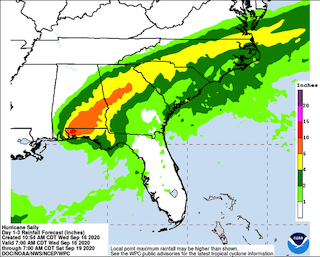 The rain was only a slight drizzle as we left our yard, passing through a fence gate to start pacing through the woods.  Our first path led to ponds of water that aren’t usually on the path.  Back tracking we found a clear path and headed deeper into the woods.

Less than a mile in the drizzle was getting louder in the trees.  Gambling we ran on.  The gamble was a loss.  Within minutes the rain was a torrent.  We turned around and ran for home.

There was no point in sprinting we were going to get soaked no matter what we did.  River did pick of the pace.  She’d gallop ahead, pause to look back to make certain I was still behind her. Once we made eye contact she was off again.

As soon as we reached home the rain slacked up a bit.  Nevertheless, both dog and man were drenched.  Worse for wear were my tired old Nike shoes.

Those shoes had finally given up the ghost.  They were 15 months old!  The soles had been re-glued three times.  The black rubber bottom heels were worn to the white foundation of the bottom rubber.  But, man did they feel nice running trails – they were seriously broken in.

Slogging through puddles had been the last gasp of the amateur shoe repairs. Still, 15 months for Nike’s least expensive (or near about) shoes, at $50.00 a pair via Amazon, is a deal.  Those shoes didn’t owe me a thing.

Rather than pull out the Elmer’s and try to bleed another few weeks from the shoes I guessed it was time to reorder.  Coincidentally, my most recent issue of Runner’s World (RW) had arrived in the mail a few days prior to Sally’s arrival.  On page 63 RW has an article meant to help me, “22 Best Shoes You Can Buy Right Now”. 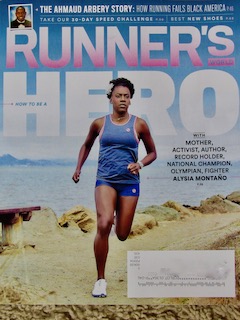 The average price of the 22 best shoes, as advertised in RW, is $140.68.  Shamelessly, I have spent that and more on a single pair of running shoes.  In fact, I have two pair of big money shoes still in their boxes.  I don’t wear them; they are too expensive to waste for everyday training.  I’ll save them for that day I might enter a race, again. (Even though I expect they won’t help me run any faster at this point.  At least I can still look serious)

I’ve even got a pair of old track shoes.  I raced wearing those in just one race years ago at the US Track & Field Masters Indoor National Championship. Now, they are just a relic from days gone by. 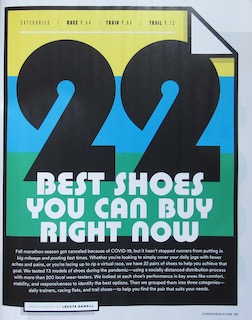 Years ago, well more than a decade, I was running in ASICS.  A fellow I was working with on a project was one of their athletes.  He’d won a Gold Medal in the Olympics and his ASICS shoes looked comfortable to me so I tried a pair. (Not his, I bought my own)

They were just fine.  I ran wearing them for many years. (ASICS never did contact me with a contract.Do they sponsor archers?)

When I was running in high-level events I did pay a premium for shoes.  Now a-days, I run a few miles each morning because I enjoy it.  The old Nikes had about 1600 mile in them. That is a heck of lot more miles than I once got out of a pair of shoes running roads.  Running roads I’d have been lucky to get 600 miles out of a decent pair of running shoes.  Trails, at least mine that are mostly pine straw covered hard pack, have been generous to the life of my shoes.

The old Nikes will go to the trash, soon.  I always takes me a few days to say goodbye to old friends that have supported me.