A few weeks before the IBO World Championships I decided to get my house power washed. Living on a river in the country means that bugs and spiders cover every outdoor surface. We had a lot of surface area that needed cleaning.

Since we do now live in the Tarheel State full time and no longer have cash flowing in (a matter of retirement) I decided to buy a nice power washer and do the cleaning myself. I found a nice one on sale at nearly ½ price – $500.00.

I’ll admit I’ve had some experience with a power washer. I’d borrowed one from my father-in-law that actually belonged to my brother-in-law. It wasn’t hard to operate and it didn’t do a great job. There wasn’t anything wrong with the device and it worked to specifications. The issue was that this borrowed power washer was an entry-level product with a low PSI and low GPM output. The one I purchased was double the output capacity of the one used on loan.

The force of the new power washer was dramatic. The wrong nozzle and it would peel paint from a house or etch wood. It did get the bugs, spider webs, dirt and environmental grime off the house and deck.

Power washing is addictive. Once the spray begins turning a dingy surface new it is hard to stop cleaning. I power washed for a week straight. The house and decking were good as new. The pier and dock looked like they’d just been built. All the outdoor furniture seemed as if it had just arrived from the assemble line. Heck, I power washed the kayaks, my Carolina Skiff, three vehicles, my tractor, and where I could reach the bulkhead.

What I learned is that a serious power washer is a beast to handle. The force and vibration will shake your teeth loose. It didn’t matter; I took the punishment for the sake of cleanliness. Man, everything looked great.

But, there was an unexpected price. What I noticed following a very satisfying few days of power washing was an ache in my elbow. The ache got worse. By the end of my power-washing extravaganza I could hardly bend my arm. To make things more serious, I could barely lift my bow.

It was with this condition I arrived in Ellicottsville for the IBO World Championships. I nearly skipped the tournament – frankly I couldn’t draw my bow without intense pain around my elbow. Once I had an arrow drawn the pain wasn’t as intense, so I decided to go to NY for the experience.

I got through the tournament knowing I’d need at a minimum of a couple of weeks to recover from what is commonly know as “tennis elbow.” In this case, brought on from a power washing frenzy.

Tennis elbow affects 1% to 3% of the population and as many as 50% of tennis players during their careers. Less than 5% of all tennis elbow diagnoses are related to actually playing tennis.1 In my case, I fell into the group of “scrubbers” that end up with the affliction. 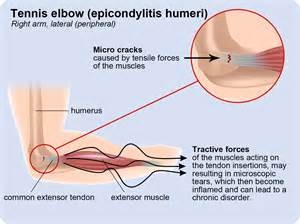 Since shooting in NY I’ve rested that arm until two days ago. It is hard not to shoot. An incentive to rest was the inability to lift the bow – the pain was much worse after the tournament. Two weeks of rest seems to have helped. The elbow still hurts but now the pain is dull and seems to be receding.

I had less success keeping away from the breast of a power washer. The addiction was too great and my wood burning grill too tempting. I did crank up the monster and cleaned that grill – it hurt. But, the grill looks practically new.