Everyday in Georgia was not an archery day.  Everyday was not a day to go hunting. One day was set aside strictly to fish.  The fishing would be a sleep-deprived event.

When most people have a birthday, going fishing is not their first choice for a celebration.  However, Brenda, my wife is not most people.  For her, a fishing trip was one of her birthday requests.   As such, her father, Ray, and I chartered a boat and guide to find striper.

Brenda loves catching striper or any fish for that matter. Even though Ray has a Carolina Skiff, a Triton Bass Boat, and G3 Pontoon (not forgetting his jet ski) and we fish from all these boats, it is nice to hire a guide service that provides the boat, gear, and bait, and let them handle the prep and cleanup – especially when it is a birthday present.

The plan was to meet Joe, our guide, Thursday at 6 AM.  Brenda said that was too early and opted for 8 AM.  For her, catching the fish is part of the pleasure; she gets nearly the same enjoyment from simply being on the water. The bonus, we’d get to sleep late, and we were certain we’d catch plenty.  Ray, 86, didn’t complain but I felt confident he’d have been first up for the earlier time.  The monkey wrench for the extra sleep was a less accommodating surprise.

The Wednesday before the fishing trip we were expecting the delivery of Polaris Magnum ATV.  The ATV arrived in the evening, around 8PM.  It had been hauled to us on a Ford F-350 that also towed a large trailer.  All was well until the driver, Clinton, backed away, turned to drive off and ran his right front wheel into a ditch.  His leaning, sedentary truck ended up perpendicular to the road blocking both directions.

Nobody at our house had any idea of the man’s predicament.  We were busy inspecting the new toy. We learned of Clinton’s wedged wheel when I took River, my Labrador retriever, out for a run.  Under River’s watchful eyes, Clinton and I disconnected the trailer and tried using the wench on a Bad Boy Buggy to provide extra pull to free the Ford.  That was a no go.  At 9 PM, I called AAA.  They said no problem; help would be here in 45 minutes.

An hour later, AAA called to say help was on its way and would be here in 45 minutes. After another 45 minutes past, now nearly mid-night, AAA called to report they couldn’t get help until Thursday – our fishing trip day, our passage blocked by a truck.

The wasted time and false hope waiting on AAA had made matters worse.  It was now very late and help would be harder to find and potentially more costly.  Clinton, using his GPS found a non-AAA tow company, Davis Classic and Collision, in Washington, GA.  Ben Davis said he’d never leave anyone in such a jam and would be right out. True to his word, Ben arrived and freed Clinton from the self-imposed roadblock.  Being worthless to provide any additional physical help, Brenda and I offered encouragement from the house.  We got to sleep around 1:30 AM.  The alarm, for our extra sleep went off at 5:30 AM.  By 8:00 AM we were on the water and after catching several fish, I was asleep on the bow. At 2:00 PM, all of us feeling the shortage of sleep, we decided to call it a day.

Despite the sleep deprivation the fishing was a blast; Brenda really enjoyed it. Once ashore, our fish were cleaned and we headed home to eat them and watch Braves Baseball.  I fell asleep in the 3rd inning with a belly full of fried fish, hush puppies, cole slaw, speckled butter beans and sweet tea. 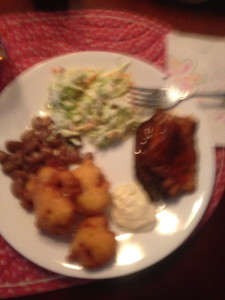