Fishing Creek Archery Club in Battleboro, NC (near Rocky Mount) had an upcoming ASA 3D tournament listed on their website. ASA rules and categories are a little different from IBO 3D shoots. I’d wanted try an ASA competition and was lucky to have found this one. It turned out to be a pleasant experience.

The shoot was less than two hours from my home in Hertford, NC. Before heading out I called Mike, one of the contacts listed on the Fishing Creek Archery website. Mike confirmed the event was correctly posted online and would take place.

The day of the tournament I arrived early and alone with the exception of my dog, River. River enjoys a road trip and loves watching archery. After signing up for the event, I hung around the registration table and the warm up field until I was grouped with two other archers.

Chris and Brandon signed in solo and were in the bow hunter class. They and I were teamed and after taking a few practice shots up we took to the targets. Chris was experienced with many of the competitors and knew to get onto the range sooner rather than later. The three of us were eager to start. We hoped to get into the woods before many of the pro’s got ahead of us. River would have to wait in the truck.

The pros with all their archery apparatus can be slow shooters. Their bows look like something from a science fiction movie. Personally, for 3D, I like keeping it simple. Simple means a Mathews ZXT, an eight-inch Trophy Ridge stabilizer, and a 7-pin Axcel ArmourTech sight. It really is a nice lightweight set-up, great for carrying around in the woods in the summer.

The weather was hot, humid, and getting hotter and more humid. The chance of rain was low, but the odds turned in favor of rain. It didn’t rain hard, and it was my first archery competition in the rain. Honestly, I enjoyed it. Chris commented that the soaking he’d gotten from the rain disguised the soaking he given himself with sweat.

The rain and heat did not distract from the magnificent course laid out for us at Fishing Creek. The variety of the 20 McKenzie targets and their placement made it a satisfying challenge. Chris and Brandon are true sportsman and our trio became easy friends. At no point did either of them laugh out loud at my fives. 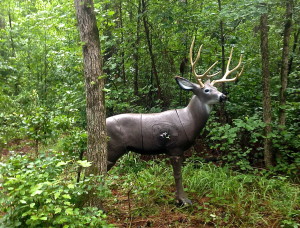 Despite our efforts to get ahead of the professionals on the range we did end up behind a group of four. Two represented PSE and the two where pros in red shirts (as were the PSE shooters) but I have forgotten who they represented. They were actually fast shooters and we rarely waited more than a minute or two for our turn at the stake. When they’d shot their final target and because I’d overheard some grumbling I asked, “Well, are y’all leaving these woods with the same arrows with which you entered?” Three out of the four professionals archers found humor in the question. 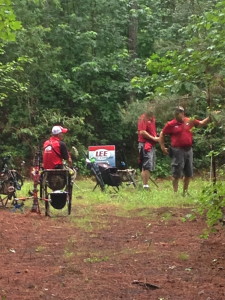 Afterwards, the staff sold burgers and hotdogs. I was starving and the burger I ate was one of the best ever. River was now out of the truck and found her way to the concessions. She conned a number of people for their food and came away with a hamburger, half a cheeseburger, and a hot dog. 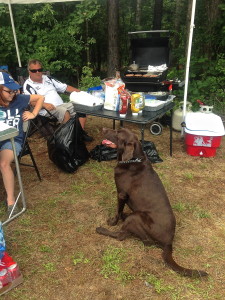 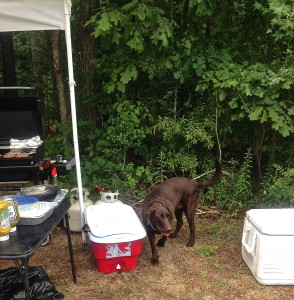 Scores were posted on a large board near the food. I was in the running for a top place. By the day’s end I’d been knocked down to fourth.

ASA is just a bit different than IBO. Nevertheless, once the target scoring is understood, the shooting is the same. I was a little nervous for the first few shots but got into a zone on the back ten. The turn out of shooters at this 3D tournament was among the largest I shot against during outdoor competition. I’m glad I found their website happy I made the drive to Fishing Creek. I met some nice people for my effort. River made new friends and ate well. Hopefully, I can make their next shoot July.