Bart Shortall is an ex-professional archer. He hasn’t shot in the pro division in a few years. Combination of a back injury and shoulder injuries has resulted in him competing in the amateur IBO hunter class category. His last injury and surgery is now behind him and he is once again hitting scores of 300+. (30 targets)

Bart owns X-Fire Stings. He coaches other archers and is again able to shoot competitively. His recent shoulder surgery seems to have healed and his cautious (not rushing things) return to competitive 3D is underway.

Following Bart’s results on Facebook I read where he’s recently won one and finished second in another 30 target 3D tournament. Bart said to me, “It is all form and focus,” even though he added his “….distance judging is still a bit off.” 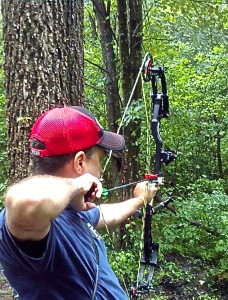 It is great to see Bart back. He is one of those inspirational people that loves the sport of archery. He’s also the only person I know that has hit a triple “Robin Hood”.