Carl is a part-time neighbor here in Hertford, NC. He was down for the Labor Day Weekend. Carl hunts anything in season and uses everything outside of his bare hands to bring home game. We’ve often talked about bow hunting and this trip he brought his bow and several targets. Naturally, we shot our bows.

My yard has three targets, two blocks and a bag. The distances have been marked by tape measure at 20 – 60 yards in 5-yard increments. On his property, Carl set up a block, a bag and a foam deer with distances measured by range finder from 20 – 35 yards. All morning he’d been working on his lawn and was ready for a break. 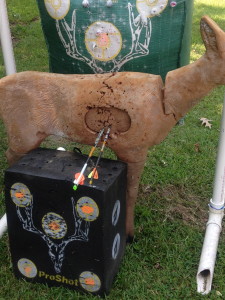 We started with my targets then moved to his yard. His faux deer was purchased last year and was well past its prime. Shooting we each used 5 arrows per end. Once we reached the deer we took turns shooting it.   Once, Carl called a neck shot. His arrow hit squarely in the neck popping the fake head off and onto the ground.

After an hour of shooting we broke for lunch. I’d started the day with a run and was hungry. After lunch I trained on my Cannondale Slice, my racing bike. Then, it was back to the range.

The afternoon wind, always blowing off the water is heaviest in the afternoon and presented a new challenge. On the bike, the headwind was relentless. Shooting, the wind remained a consistent baffling foe. Still working out pin setting adjustments needed since I’d gotten a new string I worked my way to a limited degree of confidence with the setting. They’ll change tomorrow (of course).

It was great to shoot with Carl. We’ll practice some more before he heads back to his home in Virginia. Maybe we’ll get a chance to hunt together this year.