Brenda, my wife, wanted to take a “day trip”.  Brenda is game to participate in many activities we enjoy together.  She kayaks, takes long trips on a stand up paddleboard, rides bikes with me, and loves to fish.  All of this we can do right from our home.  Still, there are days when it is nice to take a road trip.

The trip she’d selected was a drive to New Bern, NC.  We’d both been waiting to visit that city.  There’s a 5K run in New Bern listed on Active.com.  The trip would give me an idea of how early I’d need to wake up in order to compete in the 5K.  After my morning run and archery practice we loaded the dogs into our 2006 Ford F-150 and headed to New Bern.

First, we stopped in Greenville, NC.  There, for lunch, we ate Indian Food, one of our favorites.  Indian food always makes me sleepy – it is worse than turkey.  We couldn’t continue the drive until I’d walked it off or took a nap.  We’re restoring our home in North Carolina and hiked around searching junk (antique) shops for old doors that could be reclaimed.  That didn’t pan out but I did wake up.

Continuing the drive to New Bern we passed a road sign that read “Terry’s Archery Plus” six miles at the next left.  Of course, I wanted to take the detour.  It would cost us time and meant we’d be on the road longer.  Brenda pointed out, “If you don’t go you will regret it.” We took the next left and drove six miles. 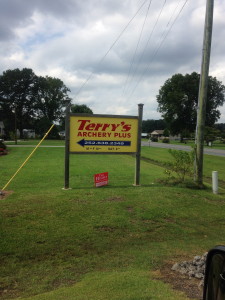 Terry’s Archery Plus is in Ernul, NC.  Ernul was not among cities on my personal geography map. On the cusps of New Bern, Ernul was settled “around” 1888 and named after two brothers, James and Freeman.  It is a farming community and has a rich past in tobacco.

Terry’s Archery Plus was a pleasure to visit.  There I met Terry, the owner, his son TJ and his inventory manager Jerry.  All three were fine examples of Southern Gentlemen.  Each was quick to smile, had a welcoming laugh and talked as if we’d been friends for years.

Terry was the center of conversation.  The man knows archery.  He offered to set up bows for me to test.  He also answered a question related to the Mathews Conquest Apex 7 that I have been asking for months.  To avoid sharing my stupidity I’ll simply write that after he answered the question I thought, “Oh, duh”.  Terry was polite about it and never let on whether or not he considered me an idiot.

There was nothing I needed to purchase at Terry’s. Indeed, I left without an acquisition and outside climbed back into the truck.  Before we returned to our original course, Brenda asked, “Do they have water in there?” I didn’t know, got out of the truck and went back inside.

Once again inside the shop I asked, “Do y’all have bottled water, my wife wants some?”  Terry relied, “We do,” and seconds letter Jerry was standing in front of me with two bottles of water for which they refused to accept payment.  Such is the manner in the South. I thanked them all, again shaking hands with each before leaving.  Our trip to New Bern was back on track.

New Bern is the Colonial Capital of North Carolina.  A charming old city on the inner banks of NC with a mass of history. Not to be missed is that it is the birthplace of Pepsi.  Brenda and I are from Georgia so we’re fans of Coke.  Now, living in NC, and being open-minded, Pepsi is no longer barred from my diet.  Brenda, more stoic, remains a firm Coke supporter when it comes to colas. 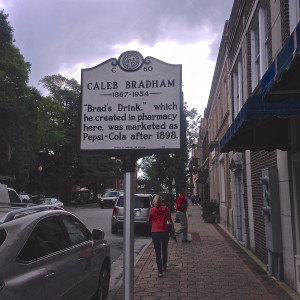 The pharmacy where Pepsi was created is now a Pepsi historical site and gift shop.  It has a working soda fountain where I purchased a Pepsi for fifty cents.  It was delicious. 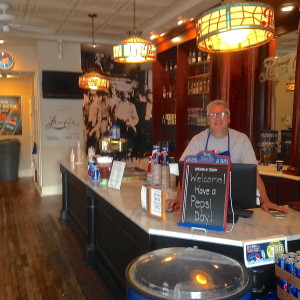 At last the “day trip” was coming to an end.  The dogs were ready to get out of the truck, I was ready to shoot, and Brenda ended the adventure with plans to return.  We had a very nice day. The tourism highlight had been Terry’s Archery Plus and meeting Terry, TJ and Jerry.  A not too distance second was drinking a Pepsi on the location where the beverage was first created.  Brenda was right, if I hadn’t stopped at Terry’s I would have regretted it.