Mathews, Inc., makes both of my bows.  Where equipment is critical I like to know about the manufacturer, the people at the company, and have a feeling for that organization. There is a lot written about Mathews on their website and floating around the internet.  In my opinion, the best information about a company comes from its employees.  I took a long shot to see if I could get an interview with anyone at Mathews.   Corrine Bundy, Marketing Communications Specialist, replied that Mathews would be happy to provide me an interview.   What I heard impressed me.

Corrine and I spoke by telephone.  She is not only a businesswoman. Corrine is a 3 time National Archery Champion and was a member of the Texas A&M Varsity Archery Team.  Aside from her athletic ability she has her Bachelor’s from Texas A&M and her MBA from Viterbo University.

When we first began our conversation, she had that MBA professional tone.  I’ve learned to recognize that pleasant yet impersonal voice from decades of business practice.  Within minutes, however, when she started talking about Mathews and archery, her tone changed to one of excitement and passion.  When I sense that ‘lightness’ someone’s voice I know I am hearing honesty.

Of the topics we discussed one she was proud of is the company’s involvement with NASP®.  The National Archery in the Schools Program (NASP®) was developed to serve specific educational and conservation purposes. Educators were looking for ways to improve student motivation, attention, behavior, attendance, and focus. While Wildlife Conservation agencies were concerned too many young people were forgoing learning outdoor skills that would inspire them to spend more time with wild things in wild places.

NASP® was created by the Kentucky Departments of Fish & Wildlife Resources,  Department of Education and Mathews Archery in the late summer and fall of 2001. Archery equipment used in NASP® is highly standardized to be safe, durable, economical, and most importantly, provide universal fit for almost every student. In NASP® learning the process of shooting is stressed far more than arrow scores. The only bow used in NASP® is the Mathews Genesis® which has no let-off and is adjustable from 10-20 pounds in draw weight at any draw length. To date, NASP® has introduced more than 11 million children into the sport of archery.  “That is more children than nationally participate in little league baseball,” noted Corrine.

As the children grew, and grew out of their Genesis bow capacity, Mathew recognized these future archers were buying mid-range priced bows from competitors.  To fill the gap between their Genesis products and their Mathews bows, they created the Mission line of bows.

The Mission bows provide the adjustability needed to match the growth of youngsters, while maintaining an affordable price tag. Actually, my first compound bow was a Mission Riot.  When I purchased my Mathews Apex 7 I immediately, without trying, had someone ask to buy my Mission Riot.  It was sold on the spot. From my experience, I honestly can’t find fault with my since sold Mission product. To replace the Mission Riot, I bought a Mathews ZXT. Having two Mathews bows is a problem – I can never decide which to shoot in a 3D tournament.

Another area where Corrine expressed pride is with the Mathews’ ProStaff.  I counted, on their website, 181 individuals on their ProStaff.  As Corrine explains it, “We have two types ProStaff.” Corrine said,  “One group are the hunters, like you would see on television.” She went on, “The other group is the tournament shooters.”

Corrine pointed out that Mathews bows and accessories are not found in “box” stores.  They focus on the community pro-archery shop.  The large ProStaff is positioned to support those shops and their community.

“Community is number one with Mathews,” she pointed out.

Asking her about the working atmosphere at Mathews, I wondered about the daily feel of the company.  For example, is there an oppressive atmosphere or one that is open and relaxed.  I wasn’t this blunt in my query but she got the message.

Corrine pointed out that when the company relocated to its current facility, a significant move, to Sparta, WI, 76% (30 of 39) chose to move with the company.  That is extraordinary and speaks for itself. Today, Mathews has nearly 400  employees.

During our call I also discovered a bit about Matt McPherson, their CEO.  He is an inventor.  It is somewhat unusual to find a person with the creativity to invent who can also be the CEO of a large business.  When I asked if McPherson was an engineer, Corrine answered that he was their chief engineer. “Before he started designing and making bows, he worked in his family’s body shop.  This experience is evident in the attention to detail found on every Mathews, Mission and Genesis bow. He cares about functionality and innovation, just as much as the look and small details.” Just the kind of genius I’d like to meet in person.

There’s a lot you can read about Mathews at their website, mathewsinc.com.  I am not going to repeat much other than to point out the tournament results, which are posted on their site.  So far, in 2014, Mathews shooters are placing on the podium approximately 2 to 1 over other bow manufacturers products.  In 2013, that ratio was slightly greater than 2 to 1.   To clarify, that ratio is twice as many wins compared all other bow manufacturers combined!

I enjoyed interviewing Corrine, hearing of her childhood days counting worms at Dutch’s Trading Post (then her family owned business) and finding her role at Mathews.  Learning, first hand, about the people that make the bows I shoot was special.  Near the end of the call, she said, “We build quality bows that maximize the shooter’s potential and ideally, takes away excuses.” Darn, I thought, I sometimes need an excuse –  it will have to be my release. 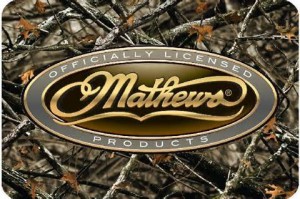