The primary reason is so that in competition, I am accustom to having a score in my head. The score needs to become a number that doesn’t lead to pressure. What I don’t want is to be in competition and worry about the score. By practicing scoring, I teach myself to record the number after each end, and then forget about it. In this effort, I record the number for each end and don’t look at the total. I’ll total the score once I have completed the session. In this manner, I am teaching myself to not focus on the score.

The second reason is to see where I set against other archers. For major indoor tournaments, scores are posted. At the moment, I am preparing for an indoor tournament and it is nice to have an idea of where I’d place today, and to set a goal for the competition.

In competition, I know to set a realistic goal. For example, if I am not shooting 60 X’s in practice, it is unlikely I will do so in near competition. At this point, that doesn’t cause me to worry. I go into each match to shoot my best to hit the X on every shot.

When I began shooting I shot below 460, today I shoot on average 560 (without adding a point for each X, 600 is max score). By watching my score I can evaluate progress. What my data reveals is that there has been an 18% improvement of my shooting scores on a FITA 3-spot over the past 12 months. The scores are collected about once a week. 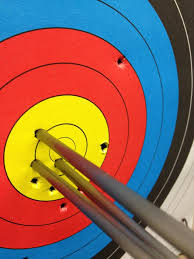 Practice is 5 to 6 days a week. As such, my scoring sessions represent 20% of my practice days. The other days I work on form, distance shooting, judging yardage, and when possible shooting 3D targets rather than paper. The primary objective with taking score is the first reason, to become accustom to tracking score while in competition. Duplicating, as close as possible to an actual event helps during a tournament. It is also reassuring to monitor progress and have an objective measure of where I’ve been and where I need to improve.