On December 7th I competed in my final archery competition of 2014. A week later I ran in my last race of 2014. Both ended on high notes despite the low temperatures.

On Saturday December 13, 2014, race day in Stevensville, Maryland the wind was blowing and the temperature was a brisk 35°F. When I arrived at the race I was pleased to find registration was next a stadium parking lot. It would be a short walk to sign-in and to the starting line.

The race officials were using the stadium ticket counter to check-in runners. They were offering hot chocolate to everyone; I declined not wanting the beverage sloshing around in my gut during the run.

There were two distance races a 5K and a 10K. I’d signed up for the 5K. After signing in, I headed back to my truck and its heater. It was too cold for me to stand around until the gun sounded.

Sitting in my truck I noticed the past seven days had left it a mess. It was filled with sports gear. In the front sat my gear for running and in the back a bow, arrows, paper targets and other equipment used in archery. It would have to be uncluttered after the race.

As the gun time neared runners began emerging from the warmth of their vehicles. A local 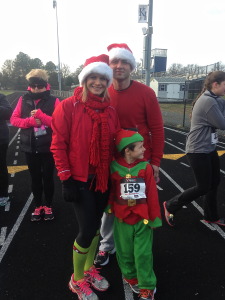 coach offered a brief warm-up session to the contenders as they approached the start line. The event was close to Christmas and many participates wore costumes. One of my favorites was a youngster, there with his parents, dressed as an elf.

Despite the warm-up session, I was not warm. On the starting line, the 10K runners lined up in front of the 5K runners. When the gun sounded I was all too happy to get moving – it was run, freeze, or get back in the truck.

I’d under dressed so I decided to go as fast as possible my motivation the warm cab of my truck. This paid off and as I passed through some of the 10K runners. I hit the 5K turn around and headed home for a 1st place finish (my age group, 13th overall).

First place prize was a Christmas stocking filled with goodies. In addition to the race t-shirt, which I received when I signed in, the stocking had another t-shirt. It also held a nice pair of athletic socks, a scented candle, mint candies, a discount coaching coupon, and a very nice beer mug.

Rolling into winter, from November, I’d competed in three races taking a 3rd, a 2nd and finally a 1st place finish, respectively. These races matched my archery tournament finishes, the last three aligned exactly with the races. A great way to finish the final six weeks of the sports season.