Shooting indoors is a blast. Indoor shooting is very controlled compared to 3D shooting so it is possible to manage foot placement up to exact head placement. In 3D the ground is not always level and requires adjustments. The weather is another factor archers must deal with when practicing outside.

Because it is winter and has been rainy the climate drove me inside for a week. (I can take the cold or I can take the wet, but I can’t take the cold and wet. Been there and done that often enough.) Finally getting a day to shoot outside I headed to Schraders’ 3D range in Henderson, Maryland to practice.

When I practice I shoot from two stakes – the bow hunter distance then the open class distance. There are 30 targets allowing for a decent training session. Since I’d not been outside in awhile I warmed up at 20, 30, and 40 yards. I’d been shooting at 20 yards on indoor ranges so my pin and eyes worked well at that distance.

At 30 yards, Schraders has a bag with four sets of lungs and hearts. There are two horizontal lines running across the middle of the bag dividing the top and bottom set of organs.

For my first shot I aimed for the top horizontal line in the middle and hit it. I then aimed for a spot on the lower horizontal line and got that, too. Finally, I shot at the small heart on the upper left of the bag and got that as well. Moving to 40 yards my results weren’t so good. It was windy so I blamed the wind and moved into the woods where the wind battle would be, hopefully, diminished. 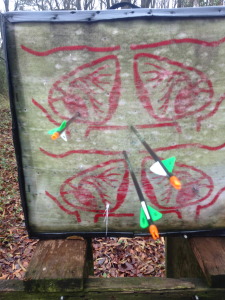 Schraders has set up some difficult targets. There’s this deer that sits at 44 yards from the open class stake. For both stakes, bow hunter class and open, the animal can only be hit by shooting between trees. My first shot at the shorter distance landed a 10. In fact, by this target I’d only shot 10’s and 11’s (IBO scoring).

When I backed up to shoot from 44 I found my feet, worked through my pre-shot sequence, laid the pin on the inner circle, and shot. The release felt great and my follow through felt just right. My arrow ended up gone forever hidden under a layer of fallen leaves. I suppose my 40-yard warm up poor shooting had nothing to do with the wind.

There’s also this turkey that can be a burden. The headless bird is out 30 yard for both stakes. It is also set so that the circles on the foam are cocked to the side and turned away from the stake. Thus, a side angle shot is the best hope for a good score in the critter.

There is not much room for error. Because of the angle, aiming for the X means that a slight error to the right and the arrow is lost. One of my arrows was already lost so I thought, “What the heck – I am going for it!” In this case, my aim and perhaps luck held true and amazingly, I smacked that turkey just right.

On the range there is another hard to judge animal. Apparently, it is hard for me and easy for others. The 10 and center circles are completely shot to pieces. There is a ridge between the stake and this small coyote. The canine is either 26 yards out or 32 yards out or somewhere in between.

The dog-like pest is set so that the sweet spot is turned away from the stake. It should be an easy shot and for many it must be easy. But, this dang dog gives me fits and 8s. The animal is so shot up it might be giving me a 10 every now and then (it would be hard to see), but for today it forced a clear 8 out of me.

The challenges of 3D shooting are different from shooting indoors. Both forms of archery are good. Some archers pick one style and stick with it as their sole entrée. There of others that shoot both disciplines.   For now, I fall into the mixed target group and enjoy both styles of shooting.