The deer below were only 12 yards away. They could just be seen in the dark. But, at 5:45 AM under a moonless sky it was too dark for a shot even at 12 yards. The brighter the morning became, the less and less I heard from the deer. That didn’t dampen our plans for tomorrow.

In the afternoon we cruised the land and found where pigs had rooted and deer had rubbed. At various points we dropped feed corn – 300 pounds of it. The process of cruising and dropping corn took three hours. The remainder of the day would be devoted to the Georgia vs. Arkansas football game followed into the night watching Notre Dame vs. Florida State.  Tomorrow we’ll head back to new areas with greater possibilities.

The other break in this week of hunting was a kayak trip on Fishing Creek. With the hunting, running, shooting targets, going to the beach and kayaking this has been a great week spent outside. Tomorrow we’ll head out to the woods once more before heading back to NC. We are all hoping for a chance to shoot. Thus far, we’ve only seen deer when we’re not hunting or that stay out of range. As Brenda says, “Patience.” 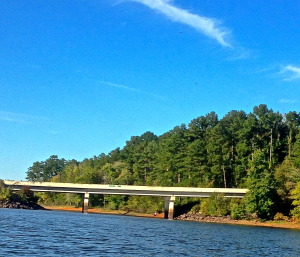