This Friday, we got back from Athens, GA too late to rush out and hunt. Tomorrow I’ll be competing in Madison, GA so hunting isn’t going to happen on Saturday. Sunday there will be hunting until football starts. On Monday, we’ll be back in the woods, again. 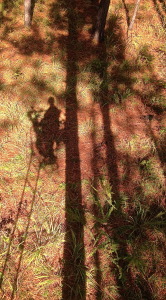 In Athens we attended Grandparent’s Day at Athens Academy. There one of our grandsons, Sean (my occasional archery and fitness coach) attends school. Sean is four and already an expert on many topics.

Athens Academy was very impressive. Visiting the campus almost made me want to go back to school. Following the program Brenda and I ate lunch then headed back to Tignall. Once I’d prepared my gear for tomorrow tournament it was too late to head out to hunt.

We’ll definitely hunt on Sunday – at least until football begins. From out previous hunts we’ve loaded up enough venison to feed us though several months. What I want is pork. A couple of smaller pigs will do the trick.

I know where the pigs are hanging out. Pigs are migratory. Once they eat all they can in one area they move to the next. Scouting I found fresh spots where they’d been rooting and rubbing trees. We have a tree stand ready and that is were I’ll be on Sunday. As a fall back Monday is on deck.