There are days, in all sports, when athletes just don’t want to train. The hope is that that day coincides with a rest day – a rare event. For me, Monday was one of those days. Practice wasn’t bad once I got started and when I was off I was consistent.

3D was on my schedule for practice. Training included focus on form and judging yardage. People that coach me, those who are paid and those offering free advice (the vast majority), emphasize the importance of form. So, Monday was primarily form and secondarily judging distance.

Regarding form, Bart Shortall, an ex-professional archer, encouraged me to write down each step I take during my process of shooting an arrow. Breaking this into individual steps is a lot to remember. I decided to break my form into a series of “caudalocephalo” movements. (opinions are welcome)

Typically, when conducting a physical assessment (in medicine, not at the pool or beach) we start from the head and work down, a cephalocaudal approach. At least that is how I described it in a textbook on physical assessment years ago. So, I assessed the movements before, during and after a shot. The physical movements aren’t top-down. (Mental activations are another story.)

In archery I start with feet first and work up. Hence, a caudalocephalo method of creating a repeatable form. The technique provides me easy to remember groupings of moves: Feet, core, shoulders, draw, anchor, aim, and release. Mental dumping (trying to reach an alpha wave dominance*) should occur between aim and release. I don’t want to think about brain waves while shooting (which would prohibit achieving alpha waves) so I didn’t write it down – out of sight, out of mind. My seven steps are easy to recall so I am giving it a try.

Monday, for the most part, I shot ok. I keep a running score each time I practice; I make notes, and add them to a spreadsheet. The scored shot is always the first shot. Sometimes, I add additional shots to work on aim or range. My first shot total today was 33 points low from my personal best. Not my worst day – not a day I will lose sleep over. (I never lose sleep over this sort of thing) 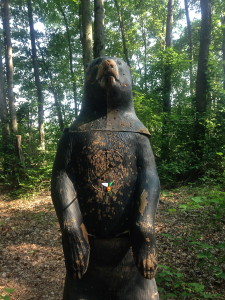 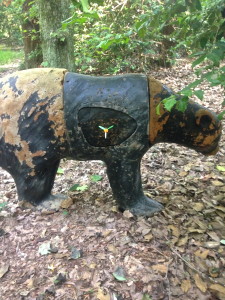 I had good shots today, particularly on bears. On some targets I shot the same bad shot twice. Several times I smacked a five. When I do that, I repeat the shot. More than once I hit that five at the same point. Optimistically, I thought, well that was consistent, so why did that happen?

Shooting 3D is a challenge for me. Monday’s practice was a bit more of a challenge than others since I was off physically and mentally. It wasn’t a rest day and my physical fatigue wasn’t from archery; it was from cycling. A bright spot following practice, I left the range with the same four arrows I carried onto the course.