My wife, Brenda, decided we needed to do the Dr. Oz cleanse diet. She’s a yoga instructor and into all sorts of mystical methods for health improvement. I accepted the challenge and figured under gastronomically adverse conditions I could sneak by Hardies when I went out to practice shooting and eat a whole food burger. 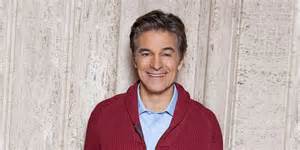 On the first day of Dr. Oz’s program, zealot disciples eat smoothies. In my opinion, one drinks a smoothie and eats food with a fork, spoon, or even chopsticks.  The smoothie recipe called for blending in kale with fruit, yogurt and protein powder, which sounded disgusting. Nevertheless, I followed my wife’s instruction and throughout the day blended kale smoothies. In my home I am master of the blender, a carry over from less healthy libations.

The kale in my smoothie wasn’t as disgusting as I’d imagination. Neither, was the kale an improvement to the smoothie’s flavor. Typically, I run in the mornings. A non-kale smoothie is often a delicious drink following a run and consumed along with fork driven food. Post today’s 5K, my smoothie rehydrated me a tad, provided a few calories, and left me wanting chewable food by 8:00 A.M.

For lunch we had another smoothie. Actually, I had all the ingredients gathered near the blender by 10:50 A.M. There was a consensus we should eat (drink) our meal at 11:00 A.M. I suggested we ration the liquid meal by consuming half at 11:00 A.M. and finish it at 2:00 P.M. At this point kale meant more calories and I wanted my full portion. And, if we rationed the drink we’d not be crossed-eyed with hunger before our dinnertime kale enriched smoothie. Such was my optimism. My schedule for the day included 3D practice at Schrader’s Outdoors in Henderson, Maryland around 3:00 pm, one of the primary reasons to ration the smoothie. I was there on schedule, my hunger so intense that not stopping at Hardies along the way was an act of the purest discipline. Brenda advised me that Dr. Oz recommends drinking water to help with the hungry pain. Dr. Oz, apparently, has a sense of humor.

At Schrader’s Club House, where shooters check in, I paid my fee for the 3D course then headed into the woods. At target 1, I headed back to the Club House to get my release, scorecard and pencil where I’d forgotten them. Prior to the first trip into the woods my concentration had been broken when I noticed someone’s left over lunch behind the counter.

Back at stake one I had my doubts whether I could finish the course before I passed out. It 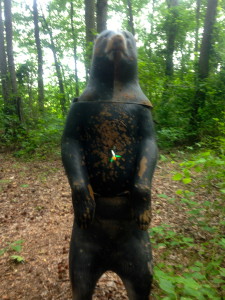 was worrisome considering that should I lose consciousness I might not be discovered for awhile – meaning when they found me I’d be even hungrier. Consciousness never abandoned me and to my surprise I shot better than usual. The improved shooting was food for thought. It occurred to me, I was very hungry. The McKenzie foam animals looked like unprepared food. Perhaps, some Neolithic survival gene had surfaced to improve my likihood of killing an animal to eat. Of course, this path of reasoning may have been somewhat hallucinogenic brought on by acute hypoglycemia.

I finished practice around 5:00 P.M. There was still one more smoothie to drink before the day was done. Because Brenda was teaching yoga that evening we wouldn’t be drinking that meal until after 8:00 P.M. Whether or not limited starvation improves hitting the X on a foam animal is an experiment I don’t plan to repeat on purpose. From the day’s experience I determined I don’t need kale in a smoothie and kale turns poop green.

2 thoughts on “Shooting on Smoothies”