The Fountain of Life, Sportsmen Ministry held a 20 target 3D tournament near Elizabeth City, NC on September 20th. Norman Mitchell, a retired US Navy Chief Petty Officer and friend told me about this event. Fortunately, I was in Hertford on the 20th and able to join the competition.

The Sportsmen Ministry operates a number of community programs. Among them is Center Shot, an archery program for the family that focuses on discipline, self-esteem, character, and is faith based. The group also conducts archery tournaments, skeet shoots, turkey shoots, and is starting an indoor archery league.

Their 3D tournament was tough. The distances weren’t overwhelming but the target placement required nearly perfect shots. Shots off the mark could have easily meant a total miss.

It seemed nothing was placed in the open. The few open targets were deceiving as they were on undulating ground.

Trees often stood between the shooter and the target so that a slight variance might leave an arrow embedded in bark.  Although the shots were tough, all shots were possible and many required a bit more thought than usual. For the most part, the arrangements matched what would likely be encountered during real hunting situations.

Teamed up with Norman and Justin we where first on the course. Targets were arranged in a circle facing out with a pond in the center. From the registration tent shooters could be seen moving along the stakes around the circumference of the pond. It was one of the few local or regional competitions, I’ve noticed, where people showed up to walk the course and watch. The course was ideally laid out for spectators.

Registration closed at 11:00 AM. The last archers wouldn’t finish until 1 PM or later. Our group, first on and first off the course had completed the 20 targets by 10 AM. The Sportsmen Ministry offered lunch of North Carolina style barbecue and hot dogs. The barbecue was quite good.

It was another wonderful day of archery. The course was challenging and well laid out. I seriously wanted to take another turn. I considered asking and was willing pay to shoot for no score. Whether of not that sort of activity would be allowed caused me to not ask, I didn’t want to ask and put someone in the awkward position of having to tell me no.

The Fountain of Life Sportsmen Ministry is doing work beneficial to the community. Their fellowship was evident among the friendly people who gathered for the competition. I was satisfied to have finished the day with 3rd Place in the Bowhunter Division. 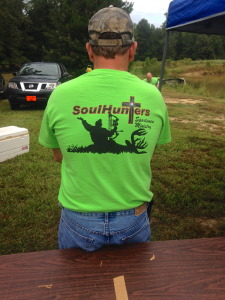