Soggy Bottom Archery Range is ever changing. The targets are demanding and well placed in natural realistic positions.  There are inducements to shooting at Soggy Bottom beyond the advanced skills gained by archers testing themselves against a challenging array of artificial beasts.  This week, the motivation for many was the Winner’s Trophy. 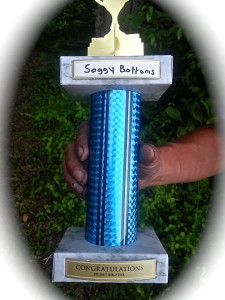 Each archer that practices at Soggy Bottom must survive pests and pestilence. Those with the fortitude to return for the weekly competition are among the best and heartiest shooters in the region if not the country.  This week unseasonably cool temperatures and rain had dampened the aggressive tick and insect attacks, but the mud and mire made up for their slack.  Prepared for the terrain, with conquest and glory in mind, a determined troop of bowmen were steadfast in their Tuesday evening assault on foam.

Norman Gustafson, proprietor of the range,  is a student of wildlife.  His study has provided him with the knowledge to amass the faux animals on his twenty-target range in exact positions where one might discover them during a hunt.  This evening, Norman laid out one of the most incomprehensible arrangements of targets one could image.  Each archer knew there was more on the line than practice.  A Winner’s Trophy was spoil for the victor.

The prize was constructed from the highest quality Far East Oriental cardboard and had been assembled by hand in America.  Customized for the Soggy Bottom range the trophy was inspiration for all to shoot their best in pursuit of the fame.

Despite fierce competition, in the woods the groups shooting in nearby proximity exchanged philosophical debate.  Individuals were identified and compared to areas of the gastrointestinal tract that ends and exists the body.  Considering the importance of the anatomical location and its function one could only regard the comparison as complementary.  Others were praised for their religious affiliation with groups related to the Pennsylvania Dutch, even though no one had arrived by horse and buggy.  The archers proffered their knowledge of science and religion while displaying for review their skill shooting 3D.

Final tally for the day gave victory to John Sapp.  Mr. Sapp accepted the trophy secured during the most difficult of competitions. Receipt of the cellulose award and the champion’s ceremony were sadly not covered by ESPN; this report being a small consolidation of the triumph.

Soggy Bottom never disappoints.  Each week new adventures await the elite that accept Norman’s challenge.  Their diligent returns speak volumes to their immune systems, eyesight, and nearly Olympic gymnasts balancing skills.  This past week, the prizewinner needed to put his best on the line to assure victory.